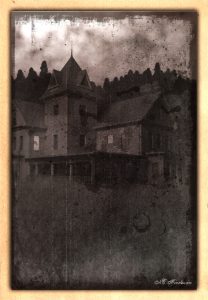 No, I did not spend Christmas in a creepy farmhouse.

I have finished the edits, and so on to the cover art! Hurrah! Yes, I thought that Sorrows’ Knights would be out by Christmas. However, I did not reckon with the power of the holidays to truly foul up even the best intentioned of plans. Still, there is progress.

I do hope your holiday, however you do or don’t celebrate it, passed off pleasantly. Here, I had kitchen and hostess duty, per usual. Can’t complain because I get Thanksgiving off from the family, and we usually have one of those catered turkeys at Christmas. Being a vegetarian, it’s not about the feasting for me, it’s about spending time with my beloved…when I’m not standing in the kitchen cooking. Which I’m always doing.

The kitties had fun, at least. They tore up a roll of paper towels in the basement, pulled the stockings off the living room mantelpiece, and played chase endlessly. Chase is a game best played when Mom is going up or down the stairs, by zipping by and banging into her legs as she goes. Uh huh.Yep. If they weren’t so soft and fuzzy, I’d have bruises.

Cover art is going to be rendered and then composited in Photoshop. The background scene is the farmhouse from the book, seen from the field that becomes the battlefield at the end. Slow Vue render is hella slow, I have to say. Since I had the draft handy, I decided to give it the Daguerrotype treatment in Photoshop and have a little fun. You also get a bit of a cover spoiler.

Now I have to pose and render Ian and Mike for the cover, too! In a different program, one which photographs Figments, better known as Poser.

But I fear the render of the background may take a couple of days to complete. Arrgh!! Well, I’m not doing much else right now, I suppose. While that render cooks, I am taking time to re-acquaint myself with MODO and Zbrush, and watch a bunch of tutorials. Yeah, I like tutorials more than TV, mostly. That’s my take on entertainment: if I’m not making something or learning something, I’m not very interested in it. Live humans are excluded from this rule.

Hmm. I figure marksmanship comes under “learning to blow up paper ever more effectively.” 😀

As soon as I get this cover done—this week, I hope, fingers crossed—I will be able to pop the book up onto the Kindle publishing queue. They say it’s a three-day turnaround now. Holy smokes!

Be seeing you in print real soon!