Home > Julian’s in Trouble… Again, or Will Be

Julian’s in Trouble… Again, or Will Be 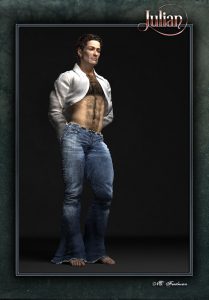 Julian, about to get into trouble. I can just tell. Jeez, these figments.

In Sorrows’ Knights, we got to see Julian Machliec as more than just a mysterious voice on Mike’s phone. In Sorrows’ Conjurors, you’re going to get to know him a lot better, since he’s one of the three main characters. I particularly love Julian, just because he’s at the same time both the voice of reason and almost stranger than Alex in preternatural terms. Almost.

This is mentioned because, at the moment, I’m finishing a draft of a short story/novella that comes right after Conjurors (Book 3).  I needed to let Book 3 sit a little before I go back and take a good hard whack at it to do the fine-grained text editing. It’s super-hard to do your own text edits and, let’s be honest, I can’t afford the $5K and up that hiring a real copywriter would require. So there I am: playing tricks with myself to be productive.

But There Would Be Spoilers

I really want to share more about this Julian-only story, but dangitall, there would be spoilers for Book 3. There will be about 37 to 40 pages of magic and mayhem in this story. We also get to see Assistant Director Vireo again. Then there’s discovering another sort of foe that Sorrows might go up against some day. It works out to be another case of “there’s a thousand of them and only a handful of us.” That’s always going to be the most challenging situation for the Sorrows outfit. I can be clear about one thing: Julian’s big challenge is coping with being a hated and feared Other. A really hated and feared Other.

Where Julian’s Name Came From

As an aside, if you were wondering where I got the name Machliec? It’s a family name, my family, and yes, it’s Ukrainian, from Podolskya. I have never seen it written down, so I was sort of guessing and hoping my fumbling about with transliteration would be forgiven. Because lord only knows if it was ever told to me properly in the first place. I can’t ask, that relative is dead, and the ghost isn’t talking, either. *grumble* So I memorialized that side of the family, sorta. Doing so turned into an entire family of Figments, as these things do. We shall be seeing much more of the Machliec clan!