Sorrows’ Trials and a NEW story 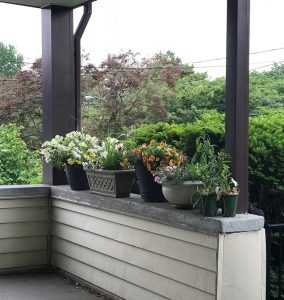 I do my best writing on the front porch in warm weather, with a nice cigar and a yummy adult beverage. Spring is here! Let the Trials begin!

I’m happy to report that I have finished the assembling outlines of both Sorrows’ Trials, Book IV of the Sorrows Chronicles, and a brand NEW story line set elsewhere in the Sorrows-verse! This is in addition to the 40-page novella, Testing Day, that comes between Books III and IV.

Trials is still going to follow thread for several main characters, but I’ve reconsidered. Julian Machliec and Mike Kaminsky are the groundwork. In and through all that we get Alex, Chu-sont’rai Shen-ro (a kitsune, a fox demon), and Carol MacAlister. You’ll meet the latter two in Book III, which has a strong female lead–something that some folks have complained was missing from Books I and II. She was always going to be in the Chronicles, but not right away. It is true, most of the ladies in my books are rather proper, but Carol makes up for that.

Book IV, like Book III, involves mages and many more demons/rakshasas–and adds a powerful Elf to the mix. Our Redcaps from Book II return, as well, for cameo appearances. Even better, part of the gang gets to go to the demon homeworld.  Yes, I use the term “homeworld” advisedly. Like Book II, magic mixes with science fiction elements. No, I can’t just write a straight-up urban fantasy. Where would the fun be in that?

Two figments, whom you have not yet met, showed up and poked at me until I paid attention. One is a cranky male Elf who dances at Deal Thomas’ gay-friendly bar in Vegas. The other is a cross-dressing wizard with a very weird secret. This time, we see what the summoning of demonic spirits costs. This new story, set in Vegas and LA, takes place toward the end of Book IV in time. The title? The Price of Magic. This is going to be a simpler and more straightforward book,  a romance plus mild adventure.

Where is Book III?

Summer break is here, and hopefully my Brave Beta Reader, who teaches at Trinity in San Antonio, Texas, will give it the final blessing soon. This means that, after I give is yet another fine-toothed-combing for typos and boring schtuff like that, Sorrows’ Conjurors will be out this summer! Yayifications!

PS – Best short & sweet book about outlining for a novel or whatever: Take Off Your Pants.