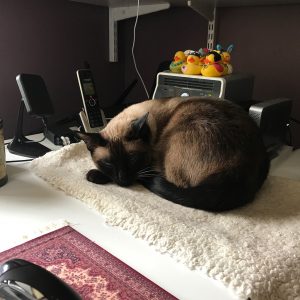 When your brain is so Spring Pollenized with allergies that your cat is more coherent than you are.

Do you get zombified by spring pollenization? I sure do. So this news bite is probably going to be seriously dumb. *lurch, shuffle, sniffle*  *scribble scribble* *lurch* Scrambled brains ‘R’ us!

Despite being Spring Pollenized, or perhaps because of it, I’m staring at Book III’s Word file and thinking, “Wow, is it really done? Ho-leee Shit!” Alright, maybe I’ll let it soak for a little bit more before re-re-re-checking a couple of scenes to make sure they’re *really* juicy. Otherwise, dang, we’re going to get TWO books out this year, instead of two years to a book.

I have indeed completed the short (40 pages or so) Julian adventure, Testing Day. Because I was all, derp, that’s what it is, just call it that. Sometimes figuring out the titles is harder than the writing. And then my heroic beta reader made her usual cogent comment and more Derp! Of course! happened. The resulting new first chapter helps a lot.

The weirdest part of putting down the new first chapter was that I sat down and said, “Julian, hon, gimme some sugar here,” and I swear he said, “I should be delighted.” Then, poof, done. Well-done? You can judge for yourself.

As for Testing Day, I think I’m going to offer it for real cheap, as well as tuck it into the back of Book III, since the two are strongly connected. The idea being that people could pick up something short (and get sucked in!! BWAHahahahaha) or buy #3 and enjoy a bit extra. 🙂

Meantime, Book IV’s outline moves along, assembling itself into a multi-threaded plot, rife with Figment torture. At this point, looks like we’ll be seeing the story from POV of Julian, Mike, Alex, and Shen-ro. I was not sure about the Carol POV, since that would have been a bit of a traditional one-female-hero-two-possible-love-interests story, and didn’t fit at all well with the antagonists in Book IV, who are scary bastids. Thingum I can promise: the cast WILL voyage off-Earth and there WILL be massive amounts of BSU. That’s Blow Shit Up, if you didn’t know already. Must have explosions! Boom! Splat!

That last was my pollenized brain giving way. Until later, my dears!