Home > Books in Print and Forthcoming

Books in Print and Forthcoming

The Sorrows Chronicles form the core of this story-verse, and center around Alexander Gotth, his family and lovers, and the god-in-many-bodies that is Sorrows.

These books have elements of both gay and straight romance, sex, violence, naughty language, and various other things that may offend the more sensitive person. Be advised. 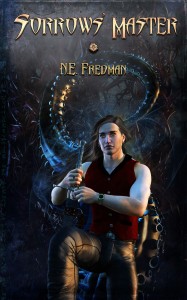 Sorrows’ Master: Book One of the Sorrows Chronicles

The sins of his fathers are very much being visited upon young Alex Gotth.

In fact, with old enemies like these, he might never make it to his unusually crucial 22nd birthday, or even graduate from college. He has help from his supernatural grandmother, friends, lovers, and vampire allies. But the family’s enemies are bent on revenge. More than one want to be free of the Gotth’s rule over the preternatural citizens of Palmers Rest, North Carolina, and they won’t stop until the family is utterly gone. And Alex is the key.

On his 22nd birthday, Alex will inherit not only control of the family fortune, but the family curse. He’s expecting to be eaten by monsters on his birthday.

At the Amazon.com Kindle Store. 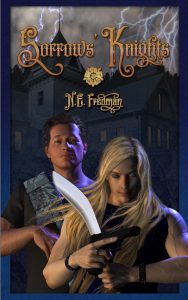 After the tumult of taking up the sword, things are starting to settle down for Alex as Master of Sorrows. Alex and his odd family are trying to get a handle on this whole I’m-a-sword-bearer-and-we’re-a-god thing. Bit by bit, they’re managing to juggle this new reality with life plans they had already made. Plans like an acting career for Kerry, and music gigs for Alex.

Having fought for Alex, veteran assassin Michael Kaminsky has decided to retire to Palmers Rest, North Carolina. Michael hopes he can fit in as Alex’s newest Bad Man—or knight, take your pick. He’s also going to try picking up with his former sweetheart, Ian Stewart, Alex’s Second, if Ian will have him back. As part of cutting his ties to his former life, Michael must make his decision known to his long-time special operations handler back in Washington, D.C. Once that is done, he can settle in to enjoy a quiet life of killing monsters and sketching architecture.

Nobody knows the trouble this one phone call is going to unleash.

But is it really all Mike’s fault? The Government’s Protocol 780, started by Alex’s own father, has been waiting for decades for the new sword-bearer to arise so they can discover what really makes Sorrows tick—and use it. An ambitious vampire master and Sorrows’ other enemies long knew this was a way to neutralize the Gotth and their threat. Science has found a means to capture a god, with a little help from the vampires, and their sights are fixed on Alex.

But Alex’s enemies’ plans don’t allow for what mayhem those two psychos, Michael and Ian, are going to unleash when Sorrows’ Master is taken. That mistake is going to cost them—a lot.

At the Amazon.com Kindle store. 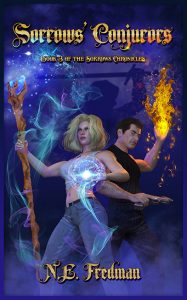 Sorrows’ Conjurors is out!

Journeyman mage and computer geek, Carol MacAlister, thought sharing her groundbreaking magical research project with Terry, the cute guy-mage, wouldn’t be such a big deal. At least, not until Terry sees an opportunity for advancement in the new Mage’s Guild. He wants to wrest her secrets from her, to give her invention to his master—and gets a surprise when he tries to take her thumb drive by force. The same night she bails on Terry, someone sends an arcane attack at her. The next night sees another attack, from a fox demon, a kitsune warrior enslaved to the Guild’s Archmage, who is sent to bind her to the Guild.

For reasons only he knows, the kitsune lets Carol go—so she runs, seeking help. Her master is incommunicado, but she is able to reach him by scrying. His obscure hints direct her to his old friend for protection: the Lady of Sorrows, Dolores Gotth. Seeking safety, Carol travels from Virginia to meet Dolores and her new sword-bearer, her great-grandson Alex Gotth, and his Coven. Which is all well and good, but mages never, ever give up, and Carol will have to go home sometime. Or does she really want to leave the handsome sword-bearer? And how can Alex and his three soldiers fend off an entire guild of mages?

Meantime, the rogue mages who stole her project begin using her invention to summon creatures from the Abyss to do their bidding. They’re on a mission to eliminate and intimidate mages who associate with preternatural people: Purity in magic is their goal. Humans Only! But this is exactly the kind of problem that Sorrows’ sword-bearers solve.
Since their last adventure, Alex and Sorrows have become linked to the mysterious Federal Bureau for Paranormal Affairs (BPA). With mages dying, the BPA also wants Alex to take down the rogues. But he’s going to need some help, in the form of his new contact at BPA, the enigmatic Julian Machliec, Mike Kaminsky’s old friend.

It’s a recipe for chaos: Take one young journeyman mage and one young sword-bearer, mix in the mischievous, smart-mouthed fox-demon and the handsome and powerful male Witch from the BPA—that Ian has his eye on—and wait for the boom.

At the Amazon Kindle Store Now! 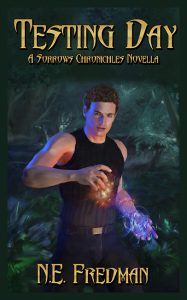 Julian Machliec, former Naval special operations, former NSA team controller, has recently been transferred to the Bureau for Paranormal Affairs, a deeply black branch of United States Homeland Security. This came about because his star asset—and murderous old friend—got himself involved with the Master of Sorrows. Figuring out how BPA works is part of Julian’s new job, which is also being the liaison between that god-in-many-bodies, Sorrows, and the U.S. Government’s branch that deals with the supernatural, unnatural, and paranormal. You would think this bizarre stuff would mess with a soldier’s head, but not Julian. He has his own secret, just revealed. He was already part of that hidden world.

At the end of the last assignment, Julian was outed as a Witch. Not a nice, herbalist Wiccan who likes to do hedge-magics and dance naked in the moonlight. No, a Witch, a member of a very rare preternatural race that can conjure and control the elements as fast and forcefully as the mighty Fae magicians of ancient days. Mages have long feared and hunted Witches, which is why Julian and his family have hidden what they are since they fled to the United States from the Ukraine during the Russian Revolution.

BPA’s policy with its arcane and preternatural agents is that they all get tested for abilities and strength of their talents, to see how much of a magical powerhouse—or problem—he can be. Julian’s boss, Assistant Director Vireo, has just confronted him and now they’re driving to Quantico, Virginia, at the Marine Base and FBI training center, to probe Julian’s powers.

Not only his magic is tested, in the end, but also his ability to evade the Witch Hunters who have infiltrated BPA.

At the Amazon Kindle Store Now!

The Coven is a lot like the Hotel California of the song: you can check out, but can’t ever leave. Mike Kaminski’s handler at the Bureau for Paranormal Affairs, Julian Machliec, discovers he really doesn’t want to, either. He’s found the missing piece of his heart in Ian Stewart, much to his surprise, and in Alex and the Coven. Is marriage in the air?

If only it were that simple. An ordinary date with Ian turns into an emergency demon-banishing that outs Julian to the BPA as a Witch, the preternatural kind, not the human arcane kind. The demon banishing turns into an urgent problem with smuggled demon-tech. Julian and the Coven must stop it, because innocent humans and demon tech, they don’t mix well.

But Ian has broken Mike Kaminski’s heart for the second time, and Mike is going to fix Ian’s wagon. Even if he has to work for the demons doing the smuggling to accomplish it—and flee to their homeworld to escape Sorrows. If he can escape, that is.

Alex was pretty sure that they had survived the Council of Magi, angry rakshasa, and an even angrier Kaminski. He has a new husband, and Sorrows has a fall-back sword-bearer (a reluctant one, to be sure). Things might settle down for Gotth and Associates, god-for-hire.

This is when Kaminski’s nutty and very psychic Aunt Ida gets the itch to rescue her wayward nephew, whom she hasn’t heard from in months. Desert Eagle in purse, she decides its time to get in the face of this Alex Gotth character and demand satisfaction.

But unfinished business from the previous summer also comes calling once more, and this time it’s killing the children of previous Coven: the grandchildren of the aging son of Augustus Gotth’s First, Daniel McPherson. The angry sorcerer is back, and he’s going to get in Alex’s face if it’s the last thing he, or Alex, does.

0 comments on “Books in Print and Forthcoming”

3 Pings/Trackbacks for "Books in Print and Forthcoming"