So, a progress report on the writing: Yes, I have been busy on Book 2 and Book 3! I’m inching ever closer to publishing Sorrows’ Knights to Kindle.

But First, the Conjurors 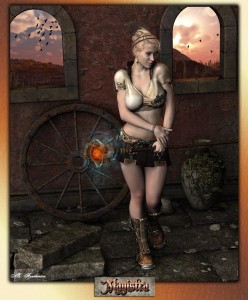 Magistra Carol, whom you will meet in Sorrows’ Conjurors, Book 3

Book 3, Sorrows’ Conjurors, turned into a many-months day off from Sorrows’ Knights. Jeez, you say, don’t hurry or anything. On the other hand, this means you’ll have it in fairly quick succession, and not two years later.

I have finally, finally finished the ending of Book 3, Sorrows’ Conjurors. WHEW. It took several afternoons at my local Cigar Lounge recently (too cold now to sit outside on the front porch and work) with the Surface Book to hammer that out. Then, the very ending bit pops up all uninvited while I’m driving home last Friday, so I nailed that one down quick on Monday. Hurrah! My cats look at me funny when I dance.

Finally, the Knights Get Their Turn Again

Yesterday, I returned to the Cigar Lounge to begin my revisit edit on Chapter 1 of Book 2, Sorrows’ Knights and pluck out stuff that is unrelated back story. Fortunately, I had already set up Mike Kaminski’s themes on an earlier edit.

There is such a temptation to leave scraps of backstory in the text, but if it’s not part of the direct story…well, it’s distracting. Understand: The previous book ends about two weeks before Sorrows’ Knights begins, and yes, those events are intimately connected. Mike Kaminsky reporting to his Government handler that he is retiring to Palmers’ Rest is one of the two inciting events. The other is the initiation of Protocol 780. What is Protocol 780, you ask? Why…you’ll have to read the book. *evil laughter*

Last weekend we binge-watched several episodes of Westworld. That show is nicely written! Not to mention incredible eye-candy. Themes of self-determination and identity woven into a mystery and compelling adventure, with lots of surprises.

My, wouldn’t I like to write a book like that! LOL–wait, I just did. No, it’s probably not close to the same exalted level of storytelling, but hey, it will be fun and keep your attention, so my beta readers tell me. I’m not out to write a New York Times Bestselling Novel, here, just a rowdy good tale that will amuse the readers.

Music: The scrap of waltz from the opening title of WestWorld is haunting me. It’s also, infuriatingly, just shy of two minutes long. WANT MOAR. MOAR WALTZ. Like a Stauss symphonic waltz (I love those!) Also in that soundtrack, the cover of “Paint It Black” is worth a purchase. I have stuffed “Paint it Black” into the Sorrows’ Master playlist just because it’s larger-than-life and sinister. 🙂  Suitable for a night-time battle in a thunderstorm, heh heh heh.

Today I continue giving Book 2 a once-over edit, to try to catch typos and stuff. I’m not the best text editor for my own stuff–that’s hard as hell to do properly, anyone will tell you.

When my desktop PC returns from being repaired (busted motherboard water cooler system), I will work on the cover art. I *really* need to have Poser back up and running, as well as access to my Cintiq tablet. I *think* I could probably run the Cintiq from the Surface Book, but I don’t have Poser on here–nor my vast Poser content library. Arrgh. Okay.

Safe to say the Ian and Mike will be on the cover, possibly with Alex in the background, his back turned as he calls down lightning from the storm. Or maybe I’ll go with the tech aspects of the story…hmm. Well, I can do sketches meantime. 🙂