Home > The Lady Spring: An Illustration

The Lady Spring: An Illustration 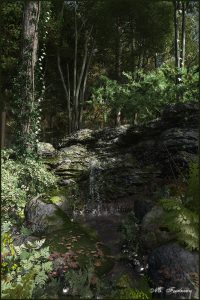 The Lady Spring, as I visualize it. Clicky for larger view.

The Lady Spring: For years I’ve had on my Vue to-do list a depiction of the Lady Spring on the Gotth Hill estate. As you may have read in Master of Sorrows, Alex did try to drown himself here when he was a teenager (but did not succeed). The water wells up from Dolores’ grotto, somehow, and forms a small creek that runs through the estate down to the nearby lake.

As depicted, we see the lady spring in high summer. Note that there is a dog rose growing on top of the rocks, although it’s not blooming in this instance. There has to be a rose, doesn’t there? Roses make up part of the goddess symbology in the books. They represent mystery, balance, life.

Water is also an important in the stories as a symbol of life-giving grace.

I created and rendered this image in Vue Infinite, by e-on software. Vue is a high-end CGI program that a lot of movie studios use to create environments. You see a LOT of Vue in movies, and probably don’t know it. I love using Vue in my artwork because of how it creates very natural-looking scenes with relative ease.

Vue achieves the natural using fractal mathematics. Fractals of all sorts generate shapes, textures, and light within the program. If you’ve ever seen an image of a Madelbrot set or Julia set, then you’ve seen the representation of a fractal.

I rendered this scene in Vue Infinite 2016, and then used a very little bit of postwork in Photoshop for a frame, some sparkles, and to help the waterfall stand out a little better.