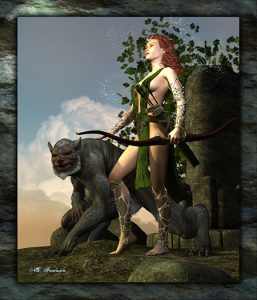 About to Fetch Slippers?

I had previously had three of the five parts of a Sorrows short story, “Fetching Slippers,” posted on this site, dating back from 2014. Good news! It’s getting rewritten as an #urbanfantasy short story.

Ack! I loathe having had this poor site, as well as MageNet, being sad little ghost towns, but what’s a girl to do? Livings had to be made, life intervened and all those lame excuses you’ve heard before. Doesn’t help one little bit that I also like to make art (Poser, Vue) and model in CGI-3d (Modo, Zbrush, Substance, Quixel), as well. Those other pursuits only add to my cycle time.

No. Not really acceptable.

But now I’ve finally gotten Knights out the door after two loooong years. Good news is that Conjurors is pretty much ready for the beta readers to kick around and pound on. I mean, as in right now it’s ready. Hmm, I had better break the news to them gently.

Thus, I’m going back to “Fetching Slippers,” in an effort to clean up my backlog. I decided to move it in sequence to lodge between Knights and Conjurors…causing Conjurors‘ timeline to move a skosh, but that’s nothing big.  The figments are fairly used to fluid reality by now, poor dears. Anyhow, I ripped the story out of the posts, and am finishing it up. I plan to present it all at once as a long page linked here. Well, not here, here, but from this site, probably under a new drop-down, such as “Free Fiction,” or something equally exciting. (*cough*)

I’ll have “Slippers” free for a while, but maybe not forever. I have not decided. Ultimately, I’d like to collect several shorter pieces into a small anthology, or even just post them as short fiction for cheap on Amazon.

The new version is completed, and with my beta reader. Twenty-four pages of silly Gotth goodness. 🙂